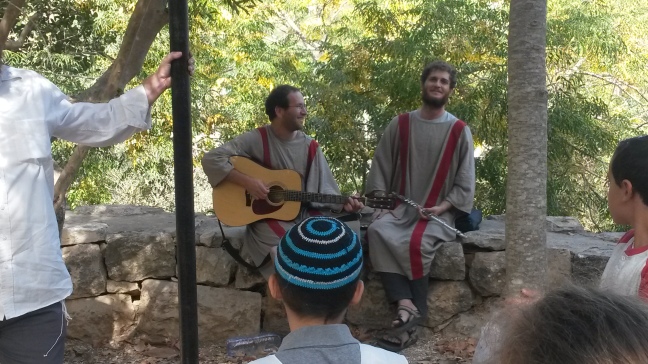 The past month in Jerusalem has been quite an experience. It has been the month of Tishrei, in which Judaism’s major festivals (chagim) fall. Think a cross between the summer holidays (country-wide) and Christmas with all it’s traditions and cheer, throw in some extra religious fervour, excellent weather and even more food, and you’re starting to get a picture of what it is like. Everybody is off work for much of the month, so even for Israel’s secular majority, it’s a holiday time. A cultural wave sweeps the country, with street fairs, public concerts and children’s festivals. Even for those working, not much gets done, and the phrase ‘acharei hachagim’ – ‘after the festivals’ is a common refrain.

Rosh Hashana, the Jewish New Year, is a time for both celebration and introspection. We celebrate with, you’ve guessed it, food. And particularly sweet foods which are to augur a sweet year ahead. Nursery kids sing songs about bumble bees, apples and honey and N came home with a plastic set of ‘ah-pol’ and ‘hah-nee’, and a plastic version of a shofar, the ram’s horn which is blown at this time of year. (I posted a video of the shofar being blown here at Pardes on my Facebook wall. If you’ve never heard a shofar, check it out – the sound is completely unique: hairs-standing-on-end, self-reflection-inducing stuff.) There are so many rich religious themes associated with this time of year, and I won’t attempt to go into them here, but you might be interested to check out the kinds of thing I’m learning at Pardes.

Shul (synagogue) over Rosh Hashana and Yom Kippur (the Day of Atonement, on which we fast and asked for good fates to be sealed for the coming year) has an intensity here which I haven’t encountered elsewhere . The atmosphere was serious and focused, with a real sense that these days were aiming to set in place what is to come. “How has your Yom Kippur been?” I asked one friend. She answered: “I’ll answer that this time next year”. In Jerusalem nearly everyone takes seriously the tradition to dress in white on Yom Kippur, as if to take on a sin-free, angelic persona before God. The effect of hundreds of people in white, singing haunting tunes and swaying in prayer, certainly moved me.

One extraordinary thing about Yom Kippur in Israel is that secular Jews treat the day differently to any other holiday. Nobody, but nobody, drives (I heard mixed reports on whether it is actually illegal to drive here on Yom Kippur but either way, the effect is the same). The street lights are turned to a special Yom Kippur mode, with the amber lights flashing constantly – an eerie, end-of-days sight. Most bizarre of all, for secular Jews Yom Kippur is chag ha ofanayim “the bicycle festival”. The car-free streets are filled with flocks of children cycling. What cheered me most of all was the sight of a couple of wheelchair-users zipping down the middle of the street at top speed, relishing the feeling of moving unrestricted by the usual pavements full of people and lamp posts.

Sukkot, the festival in which we build temporary huts to remember the Children of Israel’s wandering in the dessert after the Exodus, is a whole new experience here. It was an amazing time for a holiday with our parents and siblings, and featured N’s first trip to the beach. Sukkahs pop up everywhere here with their breezy cotton walls (so different to the heavy-duty rain-proof kind we get in the UK) and bamboo roofs. Here are some I came across…

There is a real feeling of Jews of every stripe coming together at Sukkot. It’s a custom that many secular Jews adopt and when you’re outside sitting in the sukkah, you can hear your neighbours close by. It’s almost as if you’re in one big sukkah, an idea the Talmud suggests too: “all of Israel are able to fit in one sukkah (an interpretation of an unusual spelling of the word sukkat – the singular form of the construct for you grammar fans).

Without wanting to rub it in the faces of those celebrating in cooler, wetter climes this year, Sukkot is simply designed for this country’s weather in October. We learnt a lovely Mishna in which a downpour of rain on Sukkot is compared with a master throwing a jug of water in his servant’s face. Thankfully the rain here started just after Sukkot, days after the annual prayer for rain… and it really did feel welcome after months of heat and dryness.

Something else that has struck me about the chagim here is the extent to which they can be an equally participative experience for women, something I know many feel lacking back home. It is standard for religious women to own their own lulav and etrog set here (these are the plants and fruit we gather together on Sukkot – more on trusty Wikipedia). In the shul I went to, just as many women did the Hoshanot circuits as men, on our own side of the mechitza (divide between men and women). The passionate singing and dancing on Simchat Torah would have sent Samuel Pepys into a frenzy of horror. But most poignant of all for me was witnessing the woman sitting next to me on Simchat Torah receive her first aliyah (call-up) to the Torah. (Traditionally on this festival every man is called up the the Torah, and increasing numbers of shuls offer women the same option). The woman read the blessings tremulously, and returned to her seat with tears silently streaming. She was Israeli and seemed to be from a secular background. I longed to know her story.

The chagim in Jerusalem – wow, what an experience. On one level the overriding thing that strikes me is the ease, the naturalness of celebrating here. There is a day off work to prepare for each festival; there are Sukkah stores every few hundred meters; the religious fervour is genuine and unembarrassed; a creche in shul means parents can be in the most important services of the year; religious fluency in packed synagogues results in gorgeous singing and prayer which cannot but inspire the occasional shul-goers… It was such an uplifting, right-feeling experience.

But perhaps, just perhaps, something is lost in the ease. Don’t get me wrong, I don’t miss the rain drops plopping into plates of food in a chilly British sukkah. Not for a moment. But celebrating in the UK demands more of you – the telescoped work weeks, singing extra loud in shul to keep the atmosphere up, shuffling out to the garden holding plates of food in gloved hands. There is without a doubt more self sacrifice required. And maybe there’s something in that.